Charlaine Harris owns almost everything. I own the rest.

Okay, so I thought I had this chapter written, only to find I had left it as a paragraph…I’m so sorry for the wait. RL is kicking my ass right now, and I have a feeling it’s going to be like that for the rest of December. Please be patient with me, and know I love each and every review and word of encouragement.

I always love SeriousCrush, but not so much as when I dump a chapter in her lap and beg her to edit for me (and only give her a few hours)…and she does! If you want to thank someone for a shorter wait, it’s her. 🙂

“Please come in.” He had been waiting for her. A blank W4 form was on his desk, and when she came in, she sat on the chair opposite him. “As soon as we get you in the system, you’ll get paychecks like everyone else. For now, you get cash.” He stood and opened his wallet.

Sookie looked up, her eyes locked on the button of his pants. She licked her lips and then blushed. “I can wait until my paycheck.” She looked away.

He sat down and looked at the paper in front of her. “Where in Bon Temps do you live?”

“Hummingbird Road. It’s an old farmhouse that’s been in my family for generations.” She looked up and met his eyes and her face went blank.

“So, are you going to tell me about that dream of yours?” Eric raised an eyebrow.

She blinked and then blushed. “Well, um, you weren’t the only one there.”

“There’s something about him. Something different. Just like you.”

“I am nothing like Bill Compton.” His jaw clenched, and Sookie jumped a little.

“Sorry, I didn’t mean to offend you. I take it ya’ll aren’t friends?”

“You could say that.” He leaned back in his chair and narrowed his eyes at her. “What were Bill and I doing in your dream?”

Sookie’s voice dropped to a whisper. “It was the weirdest thing. He was covered with blood. My blood.”

“Your … blood.” He squeezed his lips together hiding his fangs. Just the mention of her blood and he lost all control.

“Yeah, it was so weird. It was like I was his dinner or something.”

“He was eating you?” The thought disgusted him.

“I’m not sure. That part was kind of hazy. All I know is I was afraid of him, and then you were there. You saved me.” She was staring at his mouth and her breathing became shallow. Her cheeks flushed and her pulse was pounding.

He reached across the table and touched her hand. “You enjoyed me saving you?”

Sookie let out a shuddering sigh and then pulled away from him. “Sorry, I don’t know what’s gotten into me. It was a strange dream, that’s for sure. He’s dangerous isn’t he? Pam told me not to ask any questions, but I got the impression those people he was with the other night like to hurt people.”

“Do you like to hurt people too?” Her eyes narrowed as she stared into his eyes.

“There is a fine line between pain and pleasure. Perhaps we could explore that. Some day.”

Sookie shifted uncomfortably on her seat and thumbed through the W4 form. “Can I take this home with me? I’m having a hard time thinking straight.”

Eric grinned and nodded. “Yes, you can bring it back tomorrow night. Let me walk you to your car.” He stood and offered his arm.

“Do you do that for everyone?”

“Personally escort them to and from their cars?” Sookie hesitated for a moment before wrapping her arm around his.

“Not usually, but you’re different too.”

They were almost outside when Sookie stopped to put her coat on. “I’m still not used to how small this uniform is. Without a coat, I’d freeze with as much skin as I have showing.”

Eric raked his eyes up her body. “I quite like the uniform. It would be a shame to cover such beautiful golden skin.”

“Ha. Of course you would say that. You’re not wearing a kilt and a glorified bikini.” Sookie rolled her eyes.

Eric stepped away from her and held her coat open to exam her uniform. “It’s not much shorter than the great kilt. I have one, it comes to here.” He made a line on his legs a few inches above his knees.

Sookie gave him a sly smile. “Maybe I wouldn’t complain about my uniform so much if I got to see you in yours.”

“The great kilt is not a uniform.”

She shrugged. “I guess if you’re not brave enough to wear a skirt in public I understand.”

Eric narrowed his eyes. “Are you challenging me?”

“You’ll find out tomorrow night.” He turned so she couldn’t see the smile on his face and offered his arm to her again. When she wrapped her arm through his again he pulled her closer to his body than before. “Until tomorrow night.” Eric was still holding her arm outside her car. Sorrow tugged at his heart when she pulled away from him.

“I’m looking forward to it.” Sookie unlocked her door and struggled to sit down without revealing anything.

Eric chuckled and watched her drive away. “Don’t you have work to do?” He turned to face Pam.

“Didn’t catch that part of our conversation while you were eavesdropping?” Eric didn’t blame Pam for her curiosity.

“Sookie has asked me to wear my kilt.”

Pam snorted. “And of course, you’re going to wear it. Aren’t you?”

Eric shrugged. “Why not?”

“Maybe I should have Sookie ask you for a raise. For me. I want a new pair of shoes.” Pam laughed. “I actually came out here to give you a message. The Queen called while you were busy with Sookie.”

Eric thanked her and once he was in his office, he called the Queen. She wanted to see him tomorrow night. “Pam, I’ll need you to run the place while I’m gone.”

“Does that mean I get to dress up for Sookie?” She batted her eyelashes at him.

“No.” He gave her a deadpan stare that made her pout.

His meeting with the Queen was like any other, and while they were discussing his Area, Eric turned the conversation to Bill. “While I’m here, I wanted to discuss William Compton.”

“What about him?” She straightened her back.

“He just moved into my Area and he and his friends are already causing problems for some of my employees.”

“Threatening them. In public.”

The Queen shook her head. “Keep them in line. Use whatever means necessary.” She clicked her tongue. “I had such high hopes for him.”

She laughed. The sound was light and airy. “I know. Just keep him in line, and let me know if you need me to rehabilitate them. I have a staff of trained men just a phone call away.” She went over a few more items on her agenda and then dismissed him.

Eric drove as fast as he could to get back to work, stopping at his house to change. He made a promise, and he wasn’t about to break it.

When he got to work, his excitement to see Sookie transformed into anger.

Diane, Malcolm and Liam had Pam pressed against the side of the building and were restraining her with a piece of silver while they beat her. Eric moved quickly, knocking them away from Pam. The silver chain fell out of Diane’s gloved hands to the ground. She lunged for the chain but was stopped short by Pam’s foot, which connected squarely with the side of her face. Diane grunted and fell to the ground. Her head hit with a solid thud, and then Pam was standing over her, with the heel of her shoe wedged firmly against Diane’s throat.

Liam and Malcolm recovered from the initial blow and stood, shoulder-to-shoulder, facing Eric. Eric growled and moved around them in a blur. He punched Liam in the side of the head and a split-second later Malcolm was howling with pain and doubled over clutching his head.

“Eric!” Pam lifted the silver chain with the toe of her shoe and kicked it to Eric’s waiting hand.

Eric hissed in pain as the silver burned his skin, and then he had it wrapped around Liam and Malcolm’s throats. He let go of the chain and carried the two men by the front of their shirts and threw them onto the ground next to Diane. With another quick flick of Pam’s shoe, the end of the chain covered Diane’s throat and the three of them writhed on the ground.

Pam groaned. “Fuckers! You got blood on my new blouse.” She was rubbing the stain delicately with her fingertip. Her skin had healed, but her face was covered with blood.

“Where’s Chow?” Eric growled as Liam tried to twist out from under the chain. Eric pulled his phone out of his pocket, not waiting for Pam’s answer. “I’d like to speak to the Queen please. Northman. Area Five.” He waited a few seconds and then when Sophie-Anne was on the line, he requested assistance with the three vampires they had restrained on the ground.

“I’ll have someone send a van to collect them.” The Queen’s voice was all business and then she shouted orders as she hung up.

“I sent him out for booze. We were almost out of vodka.” Pam wiped her cheek, smearing her blood across her face evenly.

Eric focused his fury on the prisoners on the ground. “What are you after?”

The two men remained silent but Diane struggled to speak. “We. Were. Just following. Orders.”

“Orders?” Eric’s rage turned into panic as he realized whose orders they were following: the only one of the group who was absent from the attack. Bill.

Stupid Bill. Who wants to see him pay for his stupidity?

On to The Tilted Kilt: Chapter 5 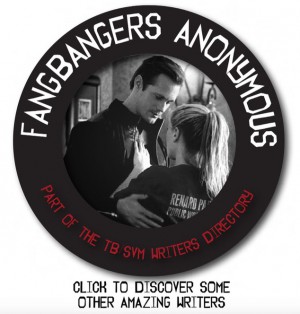